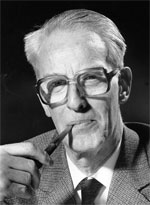 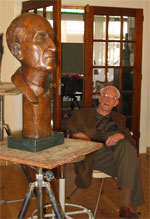 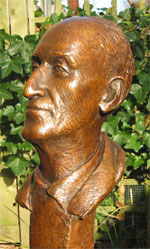 Willem Baarda was born on 20th July 1917 at Leeuwarden, the capital of the province of Friesland. After having completed high school in 1935 - after contact with a land-surveyor of the Cadastre - Baarda went to the course for 'Civil land-surveyor' which had just been established at the Delft University of Technology. In 1939 he was awarded the Diploma cum laude! After his demobilisation in 1940, Baarda found work as a land-surveyor for the Cadastre. He would continue this work to the end of 1946, among other things charged with surveying in the North East polder, i.e. the north-eastern part of the Zuiderzee land reclamation project, which became dry land in 1942. In 1946, Baarda was transferred to the National Triangulation Maintenance department in Delft, where also the training for Civil land-surveyor was housed. In 1947, following a proposal by Prof. J.M. Tienstra, Baarda was appointed Reader in Land-surveying, levelling and geodesy. In 1948, the diploma of Geodetic engineer was established. Those in the possession of a Land-surveyor's diploma of the Delft and Wageningen courses were given the opportunity to qualify as a Geodetic engineer by writing a thesis. Baarda made use of this possibility and so the remarkable event took place that a candidate who had been a university Reader for four years, got his engineering diploma. The title of Baarda's thesis was 'Reconnaissance of a Snellius point' (i.e. a resection point). In 1951 Prof. Tienstra died and on his wish Baarda succeeded him. In 1958, Baarda established the Geodetic Comput-ing Center (LGR). In cooperation with Prof. Roelofs, Baarda was involved in the whole process by which the LGR of the Department of Civil Engineering became an independent Department of Geodesy with its own complete engineering degree. In the years following he contributed to educational and organisational commissions, both at the department and university level. In 1982 he received his honourable resignation as a Professor.

In the period 1940 - 1945 Baarda laid the foundation for his later scientific thoughts. "Living in a small room at Zwolle, Baarda began to reconstruct the theory he had learned from Tienstra. He had to do this from memory and by his own wits, because he did not have the lecture notes with him and the war situation - it was 1944 - made travelling impossible." (H.C. van der Hoek in 'Forty years of thought', Delft 1982). After this period of self-study Baarda saw sharper than ever what was wrong with the classical theory of survey control. Now a start could be made with the development of a new theory. Already the Manual for the technical surveying activities of the Cadastre (HTW-56), published in 1956 and also of the hand of Baarda, shows clearly characteristics of what later would become Baarda's famous Precision and Reliability theory. Baarda's contribution to the HTW was honoured as he received the Royal distinction of becoming an Officer in the Order of Oranje Nassau.

In 1954 the Netherlands Geodetic Commission published a paper by Baarda, titled 'Some Remarks on the Computation and Adjustment of Large Systems of Geodetic Triangulations'. The paper was presented to the IAG Congress in Rome. In it, Baarda made a critical investigation of the classical theory of geodetic computations. Especially the use of the ellipsoidal computational model with its tangle of correction terms was not acceptable to Baarda.

It was a computational model that produced misclosure terms which could not be attributed to the random variations in the observational material, but instead were rather a consequence of the fact that the choice of model did not permit the use of invariant form variates. In the period following, Baarda developed his own two- and three-dimensional theory of geodetic networks. A theory in which a sharp distinction was made between estimable and non-estimable quantities, between form variates and datum parameters, and between free networks and the higher order network connections. The linking and unlinking of models, together with the consistent use of form variates, runs like a continuous thread through Baarda's work. It also stands at the basis of his famous theory of S-transformations. From a historical perspective it is interesting to note that in developing his theory of S-transformations, Baarda also had found a way of solving non-invertible linear systems. The theory of S-transformations can therefore be considered an alternative to the theory of generalised inverses.

Baarda's Delft Geodetic Computing Center (LGR) played an important role in making his ideas accepted and operational, both at the national level and at the international level. Also the long term chairmanship of the Special Study Group 'Specifications for fundamental geodetic networks' (1963-1979), entrusted to Baarda by the International Association or Geodesy (IAG), was significant in this respect. His theories were tested nationally and internationally, and rigorous, but practical solutions were formulated for use in geodetic practice.

Baarda has always had very good personal contacts with his international peers. In the initial period there were the contacts, among others, with Levallois, Dupuis and Bjerhammar, in the later period, among others, with Krarup, Grafarend and Rummel. In that later period Baarda also tried to extend his ideas so as to eliminate the artificial separation between geometrical geodesy on the one hand and physical geodesy on the other hand. His publication 'A Connection between Geometric and Gravimetric Geodesy' published in 1979 by the Netherlands Geodetic Commission is a prime example. With his consequent use of form variates Baarda obtained surprising results. But already in his 1963 publication 'Modeleffecten in de Geodesie' (report for the Netherlands Geodetic Commission), Baarda addressed issues and problems which are still relevant today for modern geodesy.

With his scientific contributions, Baarda has left an imperishable legacy to contemporary Geodesy. He has been a teacher and master of many of us. With his work, often referred to as the 'Delft School', Baarda has also enriched the geodetic vocabulary. Terms such as 'data snooping', 'w-test', 'inner and outer reliability', 'S-systems', and 'criterion matrices' are commonly used. And his computing methods are nowadays a regular part of geodetic software systems as used for cadastral, geodynamic, or earth observation applications.

It typifies Baarda that he continued, even at a progressed age, to follow the developments in the field and contributed to it. At the end of 2004 he was still active in developing his ideas further. As a result of discussions in the Netherlands Geodetic Commission concerning the revision of the National Triangulation System (RD) and the Amsterdam Height Datum (NAP), he expressed his doubts about how the geoid-concept was made operational and about the accuracies with which heights could be determined with GPS. As a result of this, meetings have been held where scientific notes of his hand were discussed.

Baarda has been granted various honours. Beside several honorary memberships, Prof. Baarda is Knight in the Order of the Dutch Lion, Officer in the Order of Oranje Nassau, Member of the Royal Netherlands Academy of Arts and Sciences (KNAW), honorary doctor of the Universität Stuttgart and recipient of the Levallois Medal of the International Association or Geodesy. And during the symposium 'The Earth to Measure', which was held on the occasion of the 125th anniversary of the Netherlands Geodetic Commission on 24 February 2004, the Prof. Baarda Lecture was established and a bust of Baarda (see photograph) was revealed.

With the demise of Prof. Baarda, we have lost one of the greatest geodesists of our time, a unique personality and an important innovator of our profession. Had Baarda, with his broad field of interest, become a biologist or an econometrist, he undoubtedly would have been a pioneer in those fields as well. Accidental circumstances determined that he became a geodesist. This we are very grateful for.