Measurement of the base and base extention net 'Afsluitdijk' 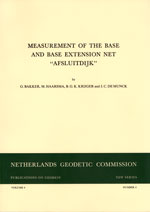 At the Third Symposium on the New Adjustment of the European Triangulation (Munich, 1962) measuring of a new base line in the northwestern part of The Netherlands was recommended to replace the old base near Stroe that was lost as a result of road reconstruction (see Bulletin Gtodtsique, No. 67, March 1963, p. 69, Resolution No. 3).

After the decision had been taken to carry into effect the above recommendation, the authors of the present report were requested to make a study of the theoretical and practical aspects of this project and to organize and supervise the actual measuring of this new base.

The selection of the site was practically limited to the dam between the provinces Noord-Holland and Friesland, known as the 'Afsluitdijk'. As endpoints of the base were chosen the towers of the sluices at both ends of the dam, called 'Stevinsluizen' and 'Lorentzsluizen'. While the base at Stroe (measured in 1913) was situated in the centre of the country, the primary triangulation of The Netherlands is now enclosed by the new base Afsluitdijk, the German bases Meppen (remeasured in 1960) and Bonn (measured in
1892), and the Belgian base Zeebrugge (measured in 1938).

Since both ends of the new base are not incorporated into the primary network, measuring of a base extension network was necessary to extend the base to .the length of a normal side of the primary triangulation. The choice of the stations for this extension network was limited to the primary stations Workum, Eierland and Sexbierum. By including the lower order stations Burgwerd and Staveren a network was obtained that could serve two objects at the same time (which had been the intention from the very beginning). These objects were:
a. Checking the scale of the primary triangulation network of The Netherlands and contributing in this way to the new adjustment of the European triangulation.
b. Obtaining accurately determined distances for the calibration of electro-magnetic distance measurement instruments.

These objects can be combined very well since both require measurements of very high accuracy. The extension network thus obtained contains distances passing almost entirely over land or over water and others passing partly over water and partly over land. In view of (b) this offers the opportunity of gaining an insight into the behaviour of the various instruments under different circumstances.

The base Afsluitdijk differs from other bases in that the ratio between its length (24 km) and the sides of the extension network is about 2:3. For this reason there was no need to measure the various directions of the extension network a different number of times (which normally is required when extending a comparatively short base to a side of a primary triangulation).

The base itself was measured using invar wires. In addition, geodimeter measurements were carried out from a pillar, erected in the middle of the base and at equal distance of both endpoints. The main purpose of the latter measurements was to obtain information about the accuracy when a certain distance (in this case half the base length) is doubled using a geodimeter whereby the invar wire measurements served as a check.