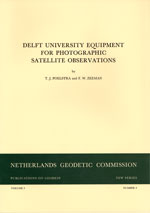 In 1966, following some years of preparation, the Delft Working Group for Satellite Geodesy started photographic observations of satellites. Since then the camera station of the Geodetic Institute of Delft University of Technology has continued participating in internationally coordinated geodetic satellite observation programmes. Contributions were made to the Western European Satellite Triangulation Programme (WEST), the National Geodetic Satellites Programme (NGSP), the International Satellite Geodesy Experiment (ISAGEX), and a Short Arc observation programme. Both optically passive and optically active satellites were observed. In 1969 the station was relocated, but still it remained in the vicinity of Delft until definitive re-establishment followed in 1973 at a more suitable site near Apeldoorn.

This publication concentrates in particular on the equipment of the camera station; this consists, inter alia, of two cameras, TA-120 and K-50. The TA-120 has been
Purchased from N.V. Optische Industrie 'De Oude Delft' and is of the concentric Bouwers-
Maksutov mirror type; the K-50 camera is a geodetic satellite camera designed on the basis of a K-50 lens-cone assembly. This camera is equipped with an automatic reloading device, capable of holding eight photographic plates (size 8" X 10"). Time is obtained by means of a revolving focal-plane chopper. These two cameras are mounted together in an equatorial Dutch mounting. This mounting is automatically positioned using predictons on punched cards. Time is recorded on punched tape and print, time-keeping is done by means of a rubidium-frequency standard.

The K-50 modification, the equatorial mounting partially and the time-recording equipment were designed and constructed at Delft University workshop. The authors are much indebted to all those who contributed to this project.