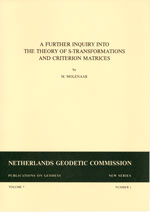 Chapter III starts with a definition of 'measurable', 'estimable' and 'non-estimable' quantities. Based on these definitions rules are given for the choice of S-bases. This chapter concludes with two examples: the choice of an S-base in the complex plane and one for spherical triangulation.

Chapter IV makes use of the theory developed in chapter II and III for finding the S-base in R3 and for finding the related S- and K-transformations. The derivations are using quaternion algebra to show the structure of the coordinate computation in R3 clearly.

Chapter V first demonstrates why S-transformations are necessary for tests on the precision of pointfields. Then a proposal follows for the structure of criterion matrices for more extended geodetic networks. This proposal is followed by a definition of homogeneous and isotropic inner precision for such networks. The relation between S-bases on the sphere and S-bases in R3 and R2 will be given. The chapter concludes with the design of a criterion matrix for networks over a sphere and with considerations about the semi-positive definiteness of such a matrix.
At the end of this introduction it is stressed once more that the theory is based on the assumption formulated in section 1.2:
Observations in geodesy are normally distributed, and functional relationships can be linearized so that the normal distribution is conserved for functions of these observations.