The global mapping of gravity with two satellites 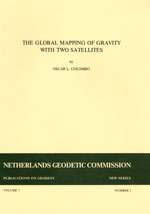 This is a report on a method for the detailed and global mapping of the planetary gravitational field using two artificial satellites that carry devices to track each other along the same near-circular, near-polar orbit, separated by a few hundred kilometers and as low as the atmosphere would allow. They are kept a loft, in spite of air drag, by the action of small rocket engines that maintain a proof-mass inside each spacecraft in constant free fall. The signal is the relative line- of-sight velocity of the proof masses, averaged over several seconds.

A specially tailored analytical perturbation theory, where the reference orbit is periodical and obtained by numerical integration in a low-degree zonal reference field, is used here to derive a linearized model for the signal. The 'lumped coefficients' of the perturbations can be calculated very efficiently with a technique that relies heavily on the Fast Fourier Transform algorithm, and whose principle is similar to that of Gauss' method for integrating Lagrange's planetary equations. Computer simulations of the relative motion of the satellites in a field whose potential is the sum of zonal spherical harmonics up to degree 300, suggest that the model is accurate to better than 1% at most frequencies present in the spectrum of the signal. The programs used for the simulations are explained and listed in an appendix.

Detailed consideration is given to a method for estimating from the data all potential coefficients up to a high degree and order (such as 300). This method is based on the choice of a common orbit that closes upon itself after enough days have elapsed to resolve all the unknown coefficients. This orbit gives a rotationally symmetrical distribution of data. After taking care of the non-periodical component of the signal (due to orbit estimation errors and secular resonant effects) by introducing extra unknowns, the normal equations of the adjustment become very sparse. With a suitable ordering of unknowns, it shows an 'arrow' structure, the 'shaft' consisting of diagonal blocks. It is feasible to solve such a system (in spite of its great size) with ordinary modern computers, and also to find the formal accuracies of the results by a partial inversion of the normal matrix.