The role of orbit errors in processing of satellite altimeter data 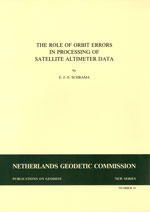 The problem of radial orbit errors in processing of satellite altimeter data is largely due to the inaccuracy of the gravity model which is required for the computation of the trajectory of the spacecraft. A commonly used technique for removing these errors consists of minimizing the crossover differences of profiles measured by the altimeter radar.

Several versions of the technique of least squares crossover minimization have been investigated using either SEASAT observations or simulated data. In these adjustments coefficients of error functions are estimated which are either locally defined over short arc segments, globally over long arc segments, or continuously over an entire arc having a length of several days. The solution of the corresponding normal equations consists of a homogeneous and a particular part.

For each crossover minimization problem (CMP) the homogeneous solution is always given as an analytical expression describing the invariances of the altimetric sea surface with respect to the crossover differences. These invariances are described by a surface deformation function which is characteristic for the problem in question. The number of coefficients in this function equals to the rank defect of the normal matrix in the CMP.

For the particular solution of a local CMP (using "tilt and bias" functions) it was found that 2 non-intersecting and non-overlapping master arc segments have to be fixed. However for global chronological segmented CMP's (using 3 parameter sine-cosine functions) only 1 master arc segment needs to be fixed for a particular solution. For continuous CMP's a particular solution is found by including 9 constraint equations in the form of pseudo observation equations. In this case the error function consists of a Fourier series truncated at a cutoff frequency of 2.3 cycles per revolution including a 2 parameter function modeling a long periodic effect in the orbit.

The underlying problem of gravitational radial orbit errors is described by means of the linear perturbations theory, which is based on the Lagrange planetary equations. Additionally the problem is formulated by means of the Hill equations describing perturbed satellite motions in an idealized circular orbit. It is shown that the non-resonant particular radial solution of the Hill equations coincides with the first-order radial solution derived from the linear perturbations theory assuming a
near circular orbit.

The first-order radial solution has been compared with a simulated signal derived by numerical integration of the equations of motion. The simulated signal consists of the radial differences between two trajectories (resembling the SEASAT 3 day repeat configuration) integrated with different gravity models. It was found that the analytical orbit error model resembles closely the simulated signal after removal of a long periodic effect.

The validity of the general solutions of two global CMP's has been investigated by means of a simulation experiment. In this experiment crossover differences are simulated by means of the radial orbit error signal described above. In a second step it is attempted to reconstruct this signal by minimizing the simulated differences.

This experiment revealed that the general solution of the segmented CMP appears to be hampered by unrealistic velocity discontinuity effects of successive arc segment error functions. In addition, it fails to describe the C11 and S11 and higher degree and order components of a geographically correlated radial orbit error. This is not surprising since one can prove that the homogeneous solution of the segmented CMP (without velocity discontinuities) corresponds to the C00 and C10 component of the geographically correlated radial orbit error. For this reason the global segmented CMP is reformulated in a continuous approach where it is shown that the homogeneous solution coincides with the geographically correlated radial orbit error. Computations showed that the simulated signal deviates to approximately 15 cm r.m.s. with respect to the general solution of the continuous CMP.

Employing the latter technique 5 independent particular solutions of a radial orbit error signal have been computed from SEASAT crossover data. These solutions appear to be highly correlated and suggest the presence of a disturbing effect likely to be caused by gravity modeling errors. Additionally it was found that the individual solutions resemble a concentration of signal near the once per revolution frequency in the radial orbit error spectrum. This solution could in principle be used to improve a part of the gravity model that is used in the trajectory computation of the satellite.

In the last part an integrated approach is described where the problem of modeling errors in the orbit, the geoid and the permanent part of the sea surface topography (PST) caused by ocean circulation are considered simultaneously. It is argued that an application of the integrated approach is justified if simultaneously gravity model improvement is performed employing tracking data of other satellites at different inclinations and eccentricities. Other aspects of the integrated approach concern the modeling problems of the PST field, an omission effect of the gravity field and the relation with the global continuous CMP.