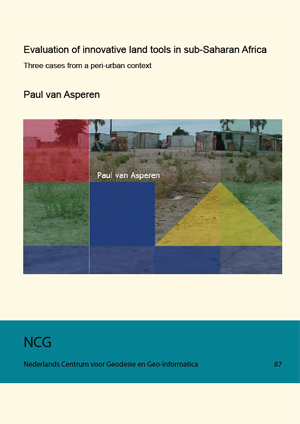 Three cases from a peri-urban context

Sub-Saharan Africa is urbanizing at a rapid pace. A major problem is that countries lack appropriate tools to manage this urban growth. When governments fail to deliver plots suitable for development, citizens will access land by informal routes and thereby become vulnerable to eviction. The ensuing fear of eviction might prevent them from improving their housing, while the informal status of the settlement does not allow the government to provide services. This thesis presents an analysis of various methods to upgrade informal land to a formal status. One of the main aims of formalization is to reduce poverty. Poverty levels in sub-Saharan Africa are among the world’s highest: 52% of the population lives on an income below the poverty line of USD 1.25 a day. Although the majority of Africa’s poor live in rural areas, poverty will increase in urban areas due to the high rates of urbanization. This urban expansion will be largely concentrated in peri-urban areas..... (see pdf)