The Delft School of Geodesy 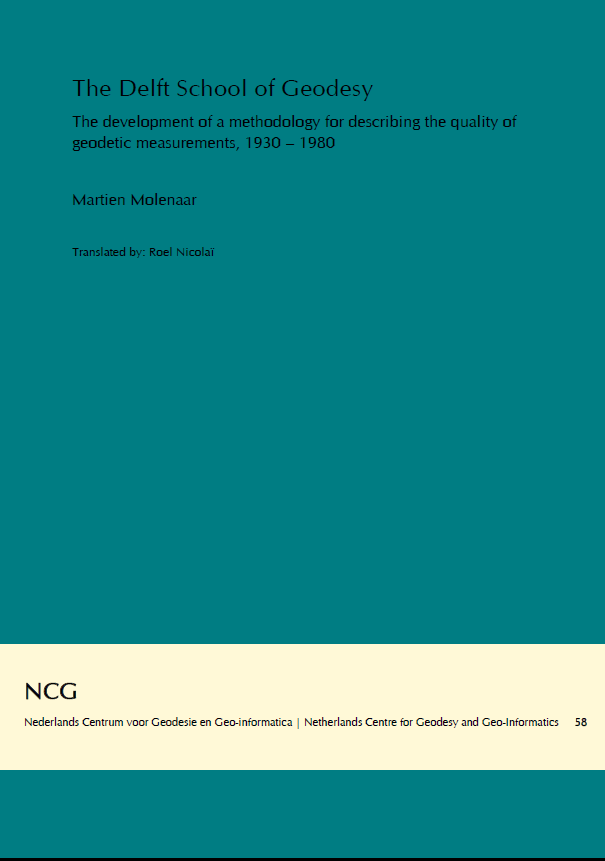 The Delft School of Geodesy (pdf)

During the twentieth century and particularly in its second half, a number of developments took place at the Faculty of Geodesy of Delft University of Technology that drew much attention, nationally, but definitely also internationally. These developments exerted an increasing influence on professional practice in geodesy and land surveying. These concerned the way in which reconnaissance surveys were conducted, measurement results processed and particularly the manner in which measurement quality was assessed. In the world of geodesy these developments are collectively referred to as the Delft School. Its most important pioneers were Jacob Menno Tienstra, his successor Willem Baarda and their co-workers. Their active contributions to this field span the period from 1930 to 1980 and that is roughly the period that will be discussed in this monograph.

The fascinating thing about this period is that problems, that were encountered in the work practice of the land surveyor and the geodesist, led to a thorough theoretical analysis of the work. That analysis yielded new concepts that were subsequently tested in practice, which led, in turn, to fine-tuning of the theoretical models. Therefore, any description of the developments of this period will have to be based on the interaction between theoretical developments and professional practice. Nevertheless, a split approach was chosen. This monograph discusses the development of theoretical framework in particular.

Two sub-periods are discussed in this monograph, focussed on the key players Tienstra and Baarda respectively. This format has been chosen for two reasons. The Tienstra period was mainly aimed at the structuring of data processing methods: the so-called five Standard Problems of adjustment calculus. In that period the beginnings of an improved theoretical framework for the analysis of the quality of measurements became visible.

The Baarda period focusses in particular on the continuation of the development of that theoretical framework for quality analysis of geodetic measurements. The concept of data quality or data accuracy was refined by breaking it down into the separate concepts of precision and reliability. Additionally, Baarda applied new mathematical concepts to the analysis of the structure and quality of geodetic control networks.

The emergence of, firstly, so-called total stations (the combination of measurement of direction and distance in a single instrument) and secondly GPS from the 1980s onward, as well as the continually accelerating development of information technology and computing, have changed the daily practice of the geodesist fundamentally. The subsequent emergence of laser altitude measurement, radar interferometry and many other novel measurement techniques contributed to more changes in the work methods of the geodesist in an even shorter time frame. Additionally, the closing of the Faculty of Geodesy at the Delft University of Technology in 2003 and the termination of the geodesy curriculum at the Utrecht Polytechnic (….) have almost stopped the inflow of new Dutch geodesists in this professional field. Therefore, in the Netherlands, geodetic tasks are increasingly performed by professionals from other disciplines, who were not educated with the concepts of the Delft School. Because of this, this system of ideas is at risk of falling into oblivion, which is an important justification for writing this monograph. It is to be hoped that people do retain the awareness of what has been achieved in this phase of Dutch geodetic history. This contribution to geodesy had a global importance and impact.

The most important development phase of the ideas of the Delft School happened before those farreaching technological changes in geodesy. For a proper understanding of this development phase, a brief description of geodetic survey practice will be provided after this introduction. The period after that tipping point might be described in a later paper.

A large number of articles dedicated to various aspects of the theoretical developments of the Delft School have been published over the last decades, in part authored by the key players themselves. This monograph will make use of such publications; a selection of publications has been compiled. Taken together, these publications provide a good summary of the period described. This monograph provides the context in which these articles should be interpreted.

In the professional field, geodesy is often distinguished from land surveying. The development of the methods by the Delft School of Geodesy were of equal importance for both. These concepts will therefore be used interchangeably; use of one term implies the other. Furthermore, the terms ‘observations’ and ‘measurements’ will be used as synonyms.