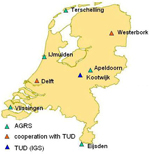 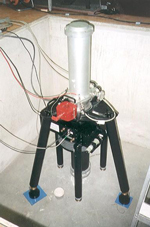 The Active GPS Reference System for the Netherlands AGRS.NL is at the base of the geodetic infrastructure of the Netherlands. With the Bernese Processing Engine daily, weekly and yearly solutions are computed in ITRS and ETRS89 in a network of surrounding IGS stations. Kadaster and Rijkswaterstaat use the AGRS.NL for densifications as GPS-base points and to certify Real Time Kinematic (RTK) reference stations among which the NETherlands Positioning Service NETPOS.

Since November 23 2006 a new AGRS.NL reference station Vlissingen was brought into use. The site is situated on a tide gauge. This expansion brings the total number of AGRS.NL stations at seven and secures the function of the AGRS.NL as base of the geodetic infrastructure of the Netherlands.

The Trimble 4700 receivers on the stations are being replaced by Topcon Odyssey RS receivers with the capability toreceive GPS as well as GLONASS signals. The Trimble chokering antennas rest in place. To our surprise these antennas receive also the GLONASS signals. At the same time the connections to the stations are being updated from telephone lines to real time connections. Data is no longer transmitted in hourly bins to a data centre, but storage takes place at a central server. This has the advantage of being freed of the burden of maintaining PC’s at remote locations and having the possibility of real time monitoring, at least during working hours. The reliability of the permanent data lines (better than 99 %) justifies this step.

The apparent movement of about 1 cm in six years at the AGRS.NL site Terschelling (up in the North on one of the isles) seems to have come t a halt according to the yearly solution of 2005. The yearly solutions over 2006 and 2007 will have to confirm if the stability of this site is according to the AGRS.NL standards: less than 3 σ (about 4 mm) change in horizontal position per year.

The sites Delft and Westerbork are not only used by the AGRS.NL, but also by the Technical University of Delft (TUD). At Delft several antenna’s are at close proximity at Westerbork AGRS.NL and TUD receivers even share the same antenna. The decision was taken to improve this situation on the point of efficiency by using the TUD receivers for the AGRS.NL also. At the same time the AGRS.NL will take care of the antenna masts and perform local measurements. This also applies for the TUD operated IGS station Kootwijk. Nowadays climbing (antenna) masts is subject of strict labour safety legislation, the personnel involved as well as the mast itself has to be certified under penalty of high fines.

NETPOS is operational since Oktober 2005. From the beginning the Topcon Odyssey RS receivers were tracking GPS as well as GLONASS signals, but only in Oktober 2006 GLONASS corrections in the RTCM 3,0 format were transmitted. Before the addition of GLONASS caused too much software malfunctions at the central server. Cadastral GNSS surveys use exclusively NETPOS as reference. The traditional non-GNSS reference points are no longer maintained. The Ministry of Roads and Waterways has a license for the use of NETPOS. The national meteorological institute KNMI, part of this ministry, uses the NETPOS data for water vapour estimations.

In 2006 the third plan period for the maintenance of the Normal Amsterdam Level NAP is concluded. This plan period covered a period from 1997 to 2006 and contains 30.000 km of secondary levelling. In 2007, a fourth 10- year plan period for the maintenance of NAP will start with a kick-off at the datum point of the NAP in Amsterdam.
Data of the fifth precise levelling campaign (1997-1999) was send to the BKG in Leipzig to replace the dutch contribution to UELN 2005. Furthermore, an update of the data of the 15 GPS stations that are part of the European EUVN DA has been submitted to connect UEVN-DA to the levelling network UELN 2005.

In the summer of 2006 an absolute gravity observation campaign was measured in the Netherlands on six stations. The observations were carried out by Olivier Francis from the University of Luxemburg and the European Center for Geodynamics and Seismology in cooperation with the Department of Earth Observation and Space Systems DEOS. With these measurements DEOS continues the study of the realisation of a precise vertical datum by means of absolute gravity observations. For this purpose DEOS purchased a FG-5 gravimeter from Micro-g. First test measurements with this instrument were carried out in December 2006 in Luxemburg.

Also continuous relative gravimetric observations were carried out using a Lacoste-Romberg ET15 to monitor changes in the gravity field. These measurement took place at the site Westerbork in a special gravimetric bunker. To study the influence of the surroundings on the gravity a network of hydrological sensors were installed. A special lysimeter was designed for this project.

The website http://www.ncg.knaw.nl/eng/subcommission/geodeticinfrastructure.html of the sub commission Geodetic Infrastructure and Reference systems GIR of the Netherlands Geodetic Commission NCG was extended with a version in English. A page with research projects was added to the site.

The Kadaster of the Netherlands is involved in a large reorganisation. The task of maintaining the reference systems, mainly the horizontal components, was taken care of by the department known as the Triangulation Department (RD). This task will be continued by the Geometric Reference Systems (GRS) department.
The Adviesdienst Geo-Informatie en ICT (RWS-AGI) of Rijkswaterstaat (former Survey Department/Meetkundige Dienst) will merge with other Rijkswaterstaat activities into the Rijkswaterstaat Data-ICT-Dienst (RWS -DID). RWS-DID will continue maintenance of the NAP (national levelling datum).