Remeasurement of the standard base line Loenermark 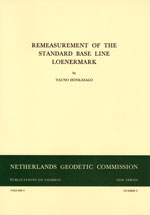 Since 1957, when the standard base line 'Loenermark' was established by our Finnish colleagues Prof.Dr. T.J. Kukkamäki and Prof.Dr. T. Honkasalo, its length has served many times for the calibration of invar tapes used in primary geodetic measurements. The most important of these measurements were: remeasurement of the German base line near Meppen (1960) and measurement of the new 24 km - long triangulation base line 'Afsluitdijk' in The Netherlands (1965).

Moreover the standard base has proved its value in calibrating electromagnetic distance measurement instruments, since exactly in the years after 1957 many such instruments appeared in this field. In this way the base line was used in accordance with the ideas of Prof.Dr. W. Heiskanen, former Director of the Finnish Geodetic Institute, expressed in Resolution No. 2 adopted at the 10th General Assembly of the International Association of Geodesy (Rome, 1954).

Since the length of the base line is given to one hundredth of a millimeter (relative accuracy 1 in 107) small displacements of the underground markers seriously affect the length of the base and consequently its accuracy. In a country with a rather unstable sub-soil like The Netherlands such displacements are not unlikely in the course of years. At the 14th General Assembly of the International Association of Geodesy (Lucerne, 1967) this question was discussed with the present Director of the Finnish Geodetic Institute, Prof.Dr. T. J. Kukkamäki, who was of the same opinion. He kindly offered to have the base remeasured by Finnish scientists using the same equipment as in 1957. The remeasurement became the more urgent when Dr. K.D. Froome, National Physical Laboratory, Teddington (U.K.) wished to test his Mekometer at a very accurately determined length and at the same time make a new determination of the velocity of light. The matter was discussed at a meeting of the Netherlands Geodetic Commission in December 1967, resulting in an official request to the Finnish Geodetic Institute for remeasuring the base. A favourable reply was received and the work was carried out in the autumn of 1969 by Prof.Dr.T. Honkasalo and Mr. P. Gröhn. The results of the remeasurements are presented in this paper.

The Netherlands Geodetic Commission is very grateful to Prof.Dr. T. Honkasalo and Mr. P. Gröhn not only for the very accurate results that once again gave The Netherlands a reliable standard base, but also for the pleasant collaboration in carrying out this project. Sincere thanks are also due to the Netherlands Triangulation Service, in particular to Mr. Haarsma who assisted our Finnish colleagues during the whole time of the remeasurement.