NAVGRAV navigation and gravimetric experiment at the North Sea 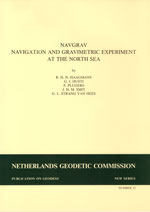 In April 1986 extented test measurements were executed with GPS instruments on board of the Dutch Navy vessel Hr. Ms. Tydeman. The GPS positions were compared with the best available terrestrial radio navigation systems, under variable conditions. The precision of GPS turned out to be 10 to 15 m in absolute position, and better than 3 m in differential mode.

Gravity measurements were carried out with two sea gravimeters. The differences between the instruments were less than 1 mgal for random errors. However systematic errors occurred on some lines up to a few mgal, probably due to errors in the cross-coupling corrections.
Also a comparison was made with results of a similar project in 1979. Only minor differences are present. Remarkable is the rather irregular shape of the gravity field, although the sea bottom is very flat. A significant gravity anomal y appears at latitude 55013', longitude 5038'. This anomaly is caused by a mass disturbance due to mantle material intruded into the crust.

In sea gravimetry the realizable accuracy is limited by Eötvös correction errors. To determine Eötvös correct ions better than 0.5 mgal, ship velocity estimation with an accuracy of 5 cm/s or 0.1 knot is necessary. The possibilities of obtaining ship velocity estimates with high accuracy by using GPS pseudorange code measurements and carrier phase measurements are investigated. The comparison of Eötvös correct ions computed with ship velocity estimates from GPS pseudoranges, Doppler smoothed pseudoranges, carrier phase measurements and Syledis and Hyperfix positions shows no discrepancies. Best results are obtained from the GPS Doppler smoothed pseudorange method. This justifies the conclusion that the effect of Eotvos correction errors in sea gravimetry can be reduced significantly.

Gravity anomalies as derived from ship measurements were compared with gravity anomalies computed from SEASAT altimetry. Altimetry provides, after correction for various disturbances, accurate sea surface heights. With good approximation one can identify the latter with geoid heights (neglecting those parts of the sea surface topography for which no models are available). Two alternative methods were applied for the estimation of Point gravity anomalies from the altimeter derived geoid heights. One method was least squares collocation, the other a very fast but theoretically less sound technique based on Fourier transformation. In both cases the long wavelength part was dealt with using the GEM10B set of potential coefficients. Collocation yielded better results. The agreement with shipborne point gravity anomalies is on the 7 mgal level with no significant bias. This proves that altimeter derived gravity is well suited for a preliminary inspection of the gravity field structure of an area of interest.