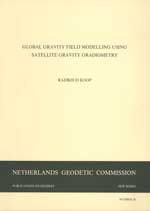 The gravitational field of the earth can be determined globally and with high precision and resolution by means of a combined Satellite Gravity Gradiometry (SGG) and Satellite-to-Satellite Tracking (SST) mission. In such a mission a spacecraft equipped with a GPS receiver and a gradiometer will be flown around the earth in a low and nearly polar orbit. The GPS receiver is used for the determination of the long spatial wavelengths of the earth's gravitational field and the gradiometer for the short wavelengths. As such the two techniques are complementary. This work focuses on the satellite gradiometry part only.

A gradiometer delivers the second order potential derivatives relative to some local orthonormal coordinate system. In particular, the gravity gradients are determined by a technique called differential accelerometry, in which the outputs of any combination of two out of (ideally) eight accelerometers are differenced. A planar gradiometer consisting of four accelerometers and working according to this principle will be on-board the Aristoteles satellite, a mission planned by the European Space Agency (ESA). The improved knowledge of the earth's gravitational field, resulting from such a mission, can contribute to many earth related sciences, like geodesy (levelling with GPS), satellite orbit determination, solid earth physics (continental lithosphere, polar regions) and oceanography, the latter not only for topics like ocean circulation but also for study of climate changes.

The earth's gravitational potential, together with its first and second order derivatives, is usually expressed as a series expansion. The coefficients of such a series (potential coefficients) describe the gravitational potential globally and are to be determined from SGG. The equations of the gradient series expansions, either in geocentric polar coordinates or in orbital coordinates (Keplerian elements), are used as model equations in the gradiometry analysis process. However, the measured gradients are delivered relative to a local orthonormal coordinate system connected to the instrument. We need, therefore, transformation equations for the potential derivatives between several coordinate systems. By means of a compact, general algorithm, which makes use of certain concepts from tensor analysis, these equations can be derived.

Using a set of known potential coefficients, the series expansions can be used to gain some insight in the signals measured by a satellite gradiometer (spherical harmonic synthesis). Reversely, analyzing a set of gradients to obtain the harmonic coefficients is called spherical harmonic analysis. Both synthesis and analysis are time consuming processes at least if a high degree and order series expansion is used or a large set of data points is used. Grid computation (making use of FFT routines) and the use of vector computers (for which the algorithms should be adapted) can decrease computation at burden. Numerical errors may enter the computations due to the use of recursive Legendre function computations and numerical quadrature formulas.

For the estimation of potential coefficients from a set of observed gravity gradients we used an analysis technique based on least squares adjustment, as it was, for the gradiometric case, proposed by O.L. Colombo. Under certain assumptions the normal matrix attains a block-diagonal structure, making it easy to solve the large system of linear equations. The a-posteriori error covariance matrix of the estimated potential coefficients can be computed by means of error propagation without the availability of actual measurements. We carried out such error analysis for several mission scenarios, not only for an idealized mission (polar orbit, no band limitation, full tensor gradiometer), but also more realistic situations like polar gaps, band limitation of the gradiometer and the planar Aristoteles gradiometer measuring only three tensor components. The latter, non-ideal situations have a rather large impact on the results. Apart from numerical singularities due to ill-conditioned sub-blocks of the normal matrix, some blocks may become singular too, which means that certain coefficients are not estimable any more from the observations. Of course the system can be stabilized by adding prior information, but this leads to biased estimates. Furthermore it appears that, even with stabilization, the results with a band limited gradiometer did not meet the requirements. Additional GPS tracking information, as it is planned for the Aristoteles mission, is needed to resolve this problem.

Since we had at our disposal a global set of simulated gravity gradients, we could perform a global recovery of potential coefficients from this set. The procedure showed here is an iterative process, but only a first step is really implemented so far. Two strategies were applied. The space-like method uses the series expansion in geocentric polar coordinates, and it requires the set of observations to be transformed into a global equi-angular grid of averaged values. Such a grid is not required for the so-called time-like method (which uses the series expansion in orbital coordinates), but this method is more time consuming. Both methods give promising results.
In our error analysis computations we assumed an instrumental precision of 0.01 E/√/Hz (as foreseen for Aristoteles). However, superconducting gradiometers are under development, aiming at a precision of 0.0001 E/√/Hz. Also, orbit determination techniques are gradually improving, aiming at the centimeter level. Such improvements of precision may, in the future, require a relativistic formulation of the model. Furthermore, from a theoretical point of view, a relativistic description of satellite gradiometry emphasizes that a gradiometer measures the curvature of four-dimensional spacetime. For those reasons, we included a relativistic view on
gradiometry. The equations are derived in the weak field approximation (in particular the so-called Post-Newtonian approximation), which is sufficient for earth orbiting satellites. The equations of motion of the satellite appear to be those of a spacetime geodesic and they show the relativistic contributions to the satellite's orbit. A relativistic description of the second order potential derivatives appears to be governed by the so-called equation of geodesic deviation. The latter shows the relativistic contribution to the observed gravity gradients. It is concluded that relativistic effects can be modelled although they are not required at present.