Theory and practice of pendulum observations at sea 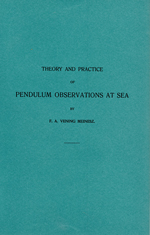 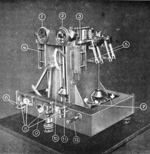 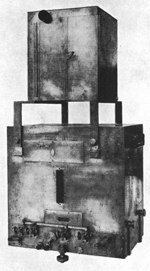 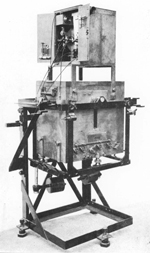 To facilitate the use of this publication, a short summary will be given of the contents.

The first chapter contains the theory of the method for determining gravity at sea by means of pendulum observations. The results of these theoretical considerations, i.e. the formulae for the corrections and reductions which have to be applied to the observed pendulum-period, are put together in § 8. § 9 indicates the principal arrangement of the new apparatus and the next paragraphs give some considerations about the most practical initial conditions for the pendulum amplitudes and phases in case this apparatus is used; sea-observations and land-observations have to be treated separately. The conclusions are repeated in Chapter II, which treats of the execution of the observations.

The first chapter is followed by several appendices: Appendix II considers the case of observations carried out with a four-pendulum Sterneck apparatus. As the observations and computations are troublesome with this apparatus and take much more time, this case is not treated in detail.
The other appendices contain further theoretical researches, which treat of problems related to the subject: The first shows how the fundamental equations may be solved more elegantly by means of imaginary quantities; the third gives some details about negligible effects of the ship's movements and the last treats the problem of three pendulums swinging together on the apparatus while mounted on a fixed support, so that only the sway of the apparatus interferes with the pendulum movement.

Chapter II gives a description of the apparatus, of the way to adjust it, of the practical execution of the observations and a short note on the determination of the sway.

Chapter III contains the methods of computation. The first five paragraphs treat of the determination of the observed pendulum period and of the reductions and corrections which have to be applied; § 5 gives an example of the complete reduction.

§ 6 is an appendix which contains a short summary of the methods of computation, which are necessary if the observations are made with the four-pendulum Sterneck apparatus.

The last paragraphs of this chapter treat of the determination of the result for gravity and of the reductions which have to be applied to this result.

According to the above summary he who wishes only to study the practical execution of the observations and computations may confine himself to § 1, the first page of § 2, § 8 and § 9 of the first chapter, to chapter II and to chapter III with the exception of 6 The theory of the method is given by chapter I, while the appendices I, III and IV of this chapter contain investigations on some related problems. Appendix II of chapter I and § 6 of chapter III refer to the use of a four-pendulum Sterneck apparatus.

Preface  III
Summary of the contents  1
I. Theoretical Considerations and Formulae  3
Appendix I to Chapter I. Introduction of complex quantities  25
Appendix II to Chapter I. Deduction of other formulae for the correction for deviation from isochronism and for the reduction to infinitely small amplitude of the fictitious pendulum  31
Appendix III to Chapter I. Deduction of the formulae for the disturbances of the fictitious pendulum, caused by the fact, that the knife-edges of the original pendulums have relative movements, if the line connecting these knife-edges deviates from its normal horizontal position  33
Appendix IV to Chapter I. Investigation into three pendulums swinging together in case the apparatus is used on land  35
II. The apparatus and the execution of the observations  48
III. The computation of the results  72