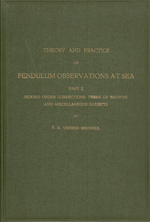 Chapter I contains the theoretical investigations about the effect of the accelerations of the pendulum apparatus on the gravity results. § I treats of the effect of the horizontal component perpendicular to the swinging plane of the main pendulums, § 2 of that of the second horizontal component, § 3 of that of the vertical component and § 4 of the rotational effects. In all cases the effect has been determined up to the terms proportional to the square of the accelerations; there is no doubt that the terms proportional to the third power are negligible. In § I we shall also have to deal with the equations of motion of the damped pendulums of the old pendulum apparatus which have not been published in the paper of 1929; we need them for the investigation of the effect of the accelerations on these pendulums. In § 5 we have separately discussed the disturbing effects for observations made in harbours at the surface of the water.

Chapter III deals with the problem of determining the corrections for the old observations. For doing this we have to make suppositions about the way the horizontal and the vertical component of the acceleration are related. By assuming the wave-theory of Gerstner or Stokes to be valid and by supposing that the apparatus describes circles in a vertical plane in the same way as the water-particles, we find such a relation and this makes it possible to deduce the complete effect of both components from; the data about the vertical component alone; these can be derived from the old records. The study of the ship's and wave-movements is dealt with in § 11, and § 12 gives the results for these movements derived from the experiments during the voyages of Hr. Ms. 0 12, 0 13 and 0 19. Besides getting thus a base for the computation of the corrections for the old pendulum results, we likewise obtained data regarding the theories about the wave-movement. § 13 gives the results for the corrections of the old pendulum observations of the stations nos 33 - 486 published in 'Gravity Observations at Sea, 1923 - 1932', Netherlands Geodetic Commission 1934. These corrections have been derived according to the methods described in this publication.

Chapter IV deals with other problems concerning pendulum observations at sea; § 14 treats of the adjustment of the old pendulum apparatus and § 15 of methods for determining the difference of the pendulum-periods and of the correction for sway.

In this paper we shall refer to the previous publication: 'Theory and Practice of Pendulum Observations at Sea' as the "publication of 1929". Contrary to what has been adopted there, and to what is usually done, we have indicated by T in this paper the complete period of the pendulums; i.e. the time of a double swinging instead of that of a single swinging. For the three components x, y and z of the acceleration we adopted the sign of the inertia forces of d'Alembert working on the masses of the apparatus because of the translational movement of the system of coordinates carried along with the middle knife-edge of the apparatus. So the components of the acceleration of this knife-edge with regard to a fixed system of coordinates are -x , -y and -z.