Gemma Frisius, Tycho Brahe and Snellius and their Triangulations 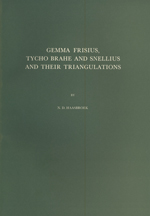 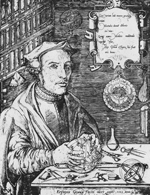 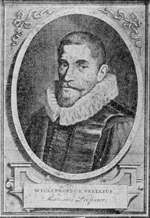 In the past few years several papers in the Dutch language have been published on the triangulation of the Dutchman Snellius (Willebrord Snel van Royen, 1580 - 1626). It seems to be justified to bring these papers in a somewhat different form and in the English language to the attention of a greater number of readers and to have preceded the description of Snellius' work by an examination of triangulations or ideas about triangulations published before 1615.

In the German translation of G. Perrier: Petite histoire de la géodésie the translator Gigas, writing on Snellius' triangulation, says, that, as in so many cases, an important discovery was made rather simultaneously and independent of each other by different people. He refers also to the report of the Baltic Geodetic Commission on the year 1930, on page 45 of which report the then president, the Dane Nørlund, makes some remarks on the history of geodetic and cartographic activities in Denmark. In the years 1578 - 1579 the famous Danish astronomer Tycho Brahe (1546 - 1601) carried out a triangulation, which, according to his intention, was to be the basis of a map of the whole kingdom of Denmark.

Neither Gigas nor Nørlund, however, makes mention of a very remarkable publication of a triangulation, inserted already since 1533 in the second and following prints of Cosmographia Petri Apiani by the Dutch geographer Gemma Frisius (1508 - 1555). Already in 1889 Van der Plaats refers to this publication as does Van Ortroy in a very elaborate and excellently documented book concerning Gemma and Schmidt in his well-known Geschichte der geodätischen Instrumente. Recently it was mentioned by Koopmans in the Dutch periodical Geodesia.

Further on in this paper it will be shown that Tycho Brahe knew Gemma's scientific work and that Snellius visited Tycho in Prague in 1600 or 1601. The exchange of scientific ideas at that occasion makes it doubtful to me whether Gigas is right in his supposing independence of their inventions of the art of triangulation.

In my opinion it is obvious that Tycho Brahe borrowed his rather primitive triangulation from Gemma's ideas and that Snellius could realize his famous meridian chain thanks to Tycho's work and Gemma's publication which must have been known to him.